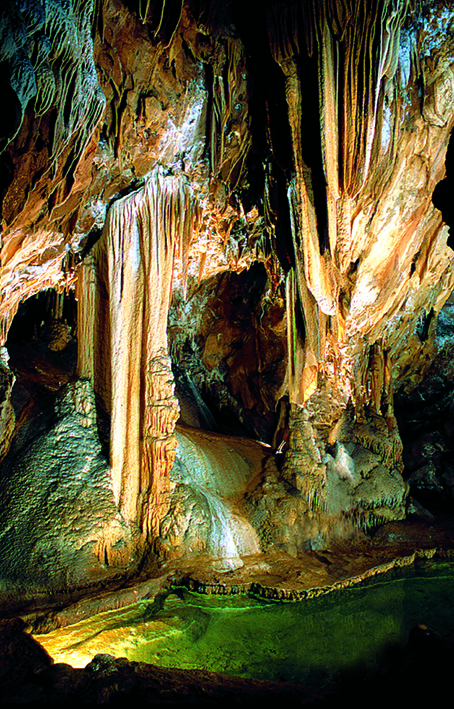 The Madeleine Caverns includes two caverns, one above the other, today connected by a tunnel. The upper chamber, the Lescure Cavern, is level with the plateau and was known for many years and was used to mine phosphate.

Below is the larger Madeleine cavern, 50 meters above the river at the foot of the cliff. It was discovered in 1887 by a shepherd named Germain Rigaud who was searching for a lost goat with only a candle for light. He shared his discovery with the locals long before explorations took place.

Much later it was explored by French cave explorers: Robert de Joly in 1936, André Glory in 1946, Jean Trébuchon in 1952-53. He drew the first map of the cavern. The upper rooms were cleared and explored in 1960 by engineer P. Girodias.

4 kilometers of chambers were explored and used as part of a camp site in the 1950’s. At that time the only way down the cliff from the plateau to the Ardeche River was a steep stairway through the caverns. The scenic road along the gorge was not built until 1967!

The two caverns were connected by a tunnel and stairs to become a 60 meter high ensemble. The caverns were opened to the public in 1969.

The name "Madeleine caverns" comes from the legend of Knight Templar's hospital devoted to the Saint Mary Magdalene and situated not far from the Madeleine site.